As a session pro, writer, and touring musician since 1979, there's little that guitarist Britt Warren hasn't encountered in the transient world of the professional music scene. Starting his professional music career as a studio musician, working primarily in the southeastern United States, he quickly found himself in situations that demanded he study and master multiple genres and styles. After his family started developing, with the birth of his twin sons, Britt made a decision to temporarily come off the road and accepted a job offer with an advertising agency as an in-house composer for national TV and radio campaigns for such clients as, Whirlpool Appliances, Wrangler Jeans (Telly Award), Bassett Furniture, Lane Action, HGTV, and the list goes on and on. In these campaigns the demand for diversity was tremendous and he rose to the occasion, composing everything from classical based orchestral compositions to hip-hop. This also helped to develop his ability on multiple instruments, resulting in his playing most of the instruments on his recordings. Due to years of composing for visual based media, Britt's compositions, even as a performance artist, especially lend themselves to film and TV scenes. Now, with family grown, and rich musical and life experiences under his belt he has re-emerged as a performance artist

Listen to a sample:  Out of the Blue (featuring Jerry Lowe on vocals) 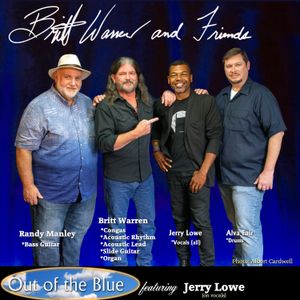 "I was born with music inside me. Music was one of my parts. Like my ribs, my kidneys, my liver, my heart. Like my blood. It was a force already within me when I arrived on the scene. It was a necessity for me-like food or water."
Ray Charles